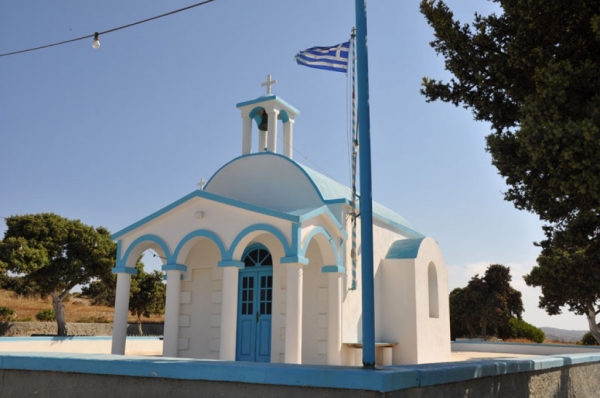 In the west side of Plaka, on craggy rocks, in 1810 the church of Panaghia Korfiatissa was built.The location is known as “Halara”, and the space in front of the church is known  as “Marmara”, due to the fact that the churchyard is paved with marble tombstones from the old city.

Visiting the church dedicated to the Birth of the Virgin Mary or Panaghia Korfiatissa, apart from the wonderful view of the sea and the spectacular sunset, you can see relics from the island’s old deserted churches, Cretan-Byzantine icons from the churches of Zefyria, holy relics kept in small silver boxes, the woodcut gold-plated icon screen, as well as the gold-plated epitaph dated from 1600 from the church of Panaghia Skiniotissa, which was brought from Smyrna.

This small Catholic church was built in 1823 by the French vice-consul Louis Brest and inside the church Brest himself was buried and his spouse was buried in the yard.

Ypapanti of Christ or Panaghia Thalassitra used to be a chapel in 1739 which was demolished in 1839 so that this magnificent bigger church would be built instead, incorporating also as a south aisle the neighboring Frankish Church dedicated to the Virgin Mary

The church of Ypapanti of Christ or Panaghia Thalassitra is the patron saint of sailors and it is the most multi-photographed church of the island.It is located in one of the island’s nicest spots and you will see it on your way up to the Castle.

In the church of Panaghia Thalassitra, you can see works of the 17th century made in the famous hagiographic workshop of the Skordilides, and specifically the important icons of Saint Eleftherios, the Virgin Mary and Jesus Christ, painted by Emmanuel Skordilis.Also, you can admire the woodcut icon screen with its amazing cross, whereas in the lintel of the church’s west gate you can see the coat of arms of Krispi, who was the duke of Naxos.

On the top of the Castle, there is the small arched church of Panaghia Skiniotissa or Messa Panaghia. Today, the church building is preserved in a very good condition, as it is a postwar building. The older chapel was blown up during the German occupation so that an anti-aircraft cantilever would be built in its place and thus the church was rebuilt after 1944.