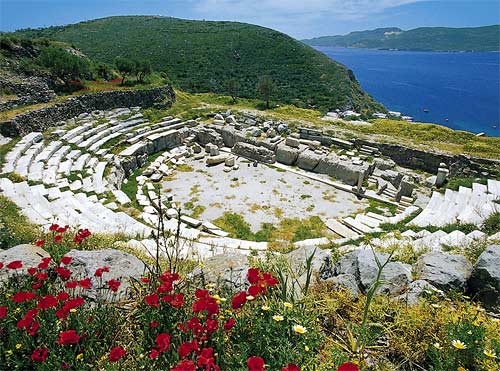 The ancient Roman Theatre was originally constructed by the inhabitants of the ancient city of Klima, possibly during the Hellenistic Age (3rd century BC).However, after the destruction of the city by the Athenians in Roman times, above the preserved foundations of the classic theater, a bigger one was built made of snow-white Parian marble and remarkable bas-reliefs, which it is estimated that it had a seating capacity of 7000 spectators.From the theatre seven marble tiers, six rows of seats, the auditorium , the orchestra, the stage floor and a lot of architecturally elaborate parts are preserved.

Built on prominent spot, on the hillside, the theatre overlooks the port, the view from there is spectacular and its acoustics are very good. So, quite often theatrical performances and music happenings take place there, as in its present shape  the theater has a seating capacity of 700 spectators.

Worth a visit to try  how good acoustics is, simply speaking without shouting will sound until the last steps!